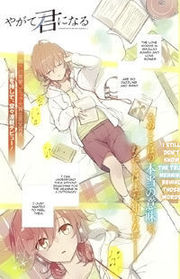 Yuu has just begun her first year in high school but has still not yet responded to a middle school graduation confession by a boy who she has always liked, but who's confession did not excite her. Yuu loves shoujo manga and she knew how confessions were supposed to feel, but she didn't feel it and she has not found a way to respond to him in months. Yuu then sees Nanami the student council president turning down a confession very thoughtfully. Yuu later discovers that Nanami has never accepted a confession because none made her feel something. Inspired by Nanami's honesty and their likemindedness, Yuu consults Nanami, but after helping her, Nanami confesses to Yuu!?
Show All
Lastest Chapters